Kamishibai (紙芝居), literally ‘paper drama‘, is a form of storytelling that originated in Japanese Buddhist temples in the 12th century.

Kamishibai: Story with a moral lesson

Monks used e-maki (picture scrolls) to convey stories with moral lessons. It had a its revival in the 1920s through the 1950s.
The gaito kamishibaiya, or kamishibai storyteller, rode from village to village on a bicycle equipped with a small stage.
Once an audience assembled, the storyteller told several stories using a set of illustrated boards, inserted into the stage and withdrawn one by one as the story was told. The stories were often serials and new episodes were told on each visit to the village. 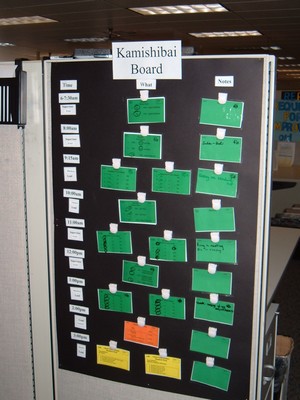 As part of the Toyota Production System, a kamishibai board is used as a visual control for performing audits within a manufacturing process.

A series of cards are placed on a board and selected at random or according to schedule by supervisors and managers of the area. This ensures safety and cleanliness of the workplace is maintained and that quality checks are being performed.