Ideally production can easily be leveled where demand is constant. Unfortunately this is rarely the case because actual customer demand fluctuates.

Heijunka -or Load leveling- is a  technique to produce intermediate goods at a constant rate. This allows further -downstream- processing to be carried out at a constant and predictable rate.

If a line is designed to cope with peak productions, it is clear that there will be waste at moments this peak is not needed.

When a downstream process varies its withdrawal of parts in terms of timing and quality, the range of these fluctuations will increase. The fluctuations move up the line towards the earlier processes.

This is known as demand amplification. To prevent fluctuations in production, even in outside affiliates, it is important to try to keep fluctuation in the final assembly line to zero.

Toyota’s final assembly line never assembles the same automobile model in a batch. Production is leveled by making first one model, then another model, then yet another. In production leveling, batches are made as small as possible. This is in contrast to traditional mass production, where bigger is considered better. When the final assembly process assembles cars in small batches, then the earlier processes, such as the press operation, have to follow the same approach.

Long changeover times have meant that economically it was sound to punch out as many parts as possible. In the Toyota Production System this does not apply. Die changes (changeovers) are made quickly (SMED). Setup times are continuously improved.

Die changes In the 1940s it took two to three hours, in the 1950s it dropped from one hour to 15 minutes, now it takes at most few minutes. 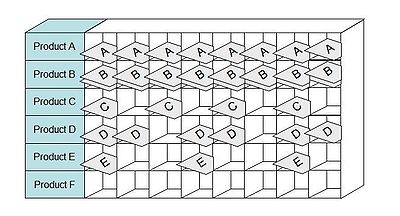 The Heijunka box allows easy and visual control of a smoothed production schedule.
A typical heijunka box has horizontal rows for each product. It has vertical columns for identical time intervals of production.

How does a heijunka box work?

In the illustration, each (time) slot is thirty minutes. Production control kanban are placed in the pigeon-holes provided by the box in proportion to the number of items to be built of a given product type during a time interval.

In the illustration above, each time slot builds a product A and two B’s along with a mix of C’s, D’s and E’s. What is clear from the box, from the simple repeating patterns of kanbans in each row, is that the production is smooth for each of these products.

This ensures that production capacity is kept under a constant pressure thereby eliminating many issues.

See here a real live example, explained by one of the employees using it: